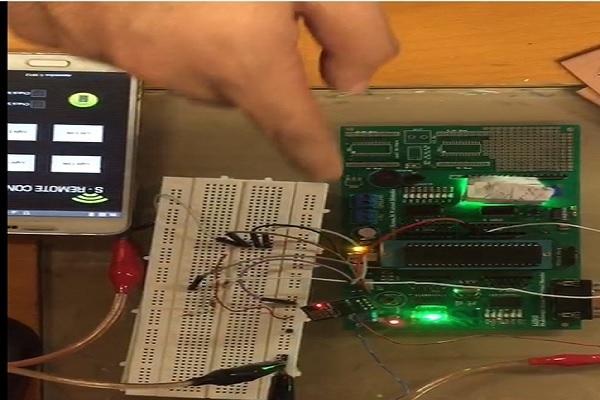 Followings are the components used in Esp8266 based home automation system:

The following project entails the user to connect to various different devices through Wi-Fi thereby functioning them through wireless means. The Wi-Fi module receives a signal wirelessly via a cellphone and then transmits it through its transmitter to the receiver of the microcontroller which in turn interprets the signal and sends a signal to the corresponding port accordingly which are initialized as outputs. A relay is used through relay interfacing for those devices which draw a larger current.

The basic working of the project is as follows:

A USB to serial bus was used to initialize the Wi-Fi module’s initial settings for instance the baud rate was initialized to 9600bps and the CWMODE of the module was set to mode 3.

ESP8266 was initialized via the following commands:

ESP8266 was then connected to the mobile hotspot by the following commands:

Once configured, the module was then connected to the microcontroller based on the above described

Circuitry i.e. the transmitter was connected to the receiver of the microcontroller and the receiver was connected to the transmitter of the micro controller. The module receives a signal wirelessly through a cellphone. It sends a signal in the form of a string of characters to the UART (Universal Asynchronous Receiver Transmitter) terminal of the microcontroller. The string received was then compared to check for which button was pressed through the cell phone by preloaded strings and then sends a high signal to the port bit which corresponds to the string. In this way, a device that is connected to one of the output ports of a microcontroller is turned on and off wirelessly through a Wi-Fi module that is configured at the same IP address as that of the mobile phone.

Basic Concept behind interpreting the signal received at the UART terminal and analyzing it to turn on the specific device:

Every time a signal is received at the UART terminal, it is stored in the form of a string of characters: ‘0 Connect, 0 Closed, 2:1’ for the first key which turns portb.b0 = 1 and similarly for portb.b1 = 1, the string received takes the form of ‘0 Connect, 0 Closed, 2:9’. Following this analyses, the string was compared on for every character which are the same until the third last character ‘2’ is received after which a variable state is set as 1 which in turn sets state = 2 since the next character is ‘:’.Following this the next character received at the UART is the distinguishing character which is compared in the if conditions written above and in this way the corresponding bit of the port is activated. 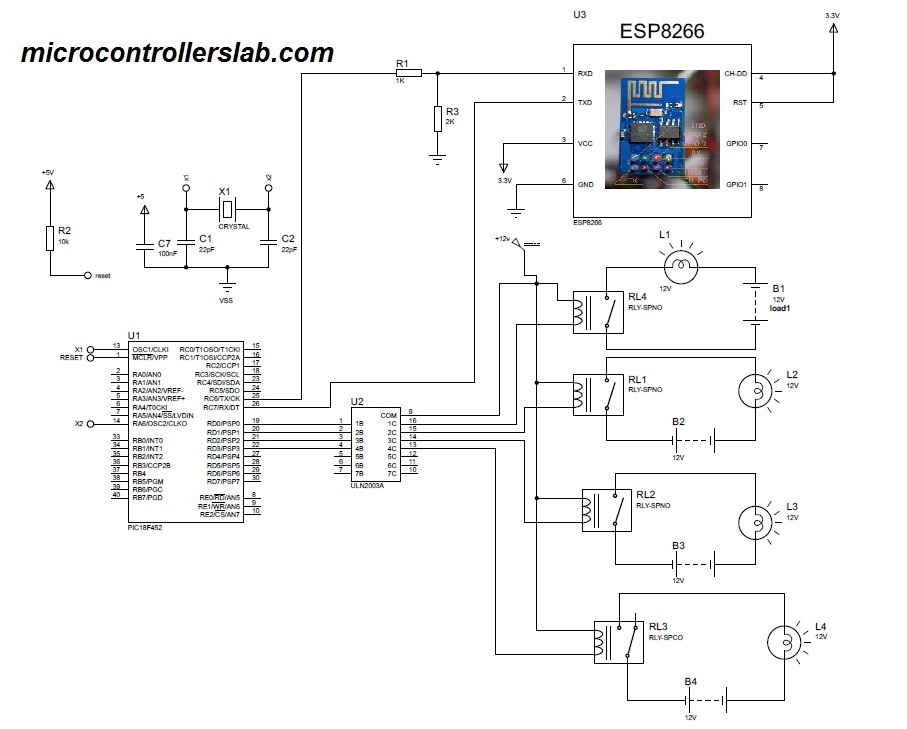 The above design indicated how when a high is received the respected transistor switches on and results in the relay being turned on which results in the port bit to be activated.

Our project was divided into two PCB’s whose proteus design is attached above. The first PCB is used to operate the microcontroller. A voltage regulator was attached to the VCC terminal so that the voltage at the VCC of the microcontroller remains stable and does not exceed 5V. A crystal external oscillator of 11.059Hz is also used that is attached in the PCB. The voltage divider circuit as explained above is also implemented on the PCB with the resistors soldered onto a Vero board followed by approximate voltage of 3.3V to the receiver of the Wi-Fi module. The second PCB is used for relay interfacing in which Bipolar Junction Transistors are used as switches. The respective proteus design is attached above.

The respective ares designs are attached below which were used to design the hardware of PCB.In lieu of the recent advancements in technology, we’re living in a world which operates through wireless means. Implementation of actual physical wires to send and receive commands has become nearly obsolete. The following project is one example of using a Wi-Fi module to operate regular home appliances wirelessly.