Voice Controlled Home Appliances System:I have already posted embedded project on Bluetooth based home automation system and tv remote controlled home automation system and wifi based home automation system.  The voice controlled home appliances system is very significant system in this so much engage world.  Everyone is engaged in his social life and have a no time to do any other thing, even on one have a time to switch on or offthe home appliances such as electric lights, electric geyser and electric fans etc. Due to this reason, the home appliances are in on condition for a long time caused the monthly bill of the electric consumer has increased from his limit and the problem has created for normal consumer. Concentrating on these bills increased and time to switch on or off problems we have designing a system that is called the voice controlled home appliances system with the help of Android applications, Bluetooth device, microcontroller 18F452 belongs to pic family and opt isolator. This system would be controlled through smart mobile phone and by using this the consumer can switch on or off the home appliances anytime from anywhere. This system also would be save the precious time of the consumer. you can also check pic microcontroller based projects. 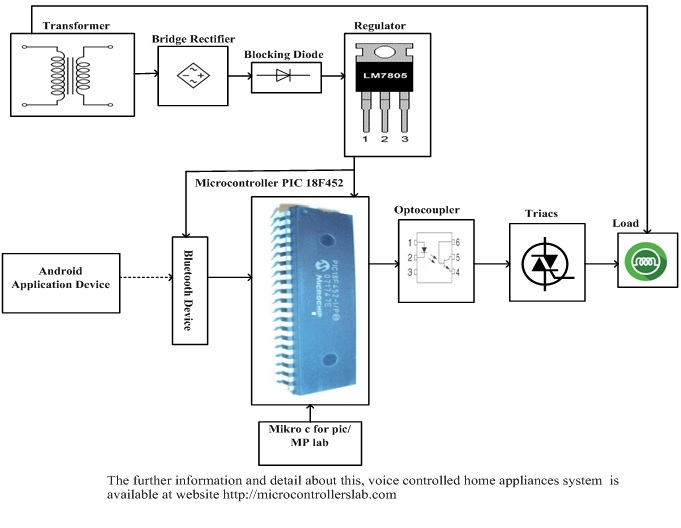 Transformer:In voice controlled home appliances system the transformer is used for power on this system because it steps down 220 V ac into 12 V ac voltages. It consists of two winding’s primary and secondary and works on the principle of mutual induction.

Bridge Rectifier:In voice controlled come appliances system because all the essential components are operated on dc therefore, the transformer output voltages are converted into dc through the bridge rectifier, which consists of four diodes.

Blocking Diode: The blocking diode is used in this voice controlled home appliances system for blocking the reverse polarity current which can damage the bridge rectifier or transformer.

Voltage Regulator: Invoice controlled home appliances systemthe voltage regulator is used for regulating the 12 V dc into 5 V dc for supplying the power to the microcontroller and Bluetooth device. The LM 7805 voltage regulator has been used in this system.

Microcontroller PIC 18F452: In this, a pic microcontroller has been used for the intelligent control of this system. It is a 40 pins microcontroller and these pins can be used as an input or output configuration. It is powered up with 5 V dc and interfaced with Bluetooth device and opt isolator. It is programmed by using c language with help of mikro c software. It is very essential part of this system without this the system can’t run.

Bluetooth Device:Invoice controlled home appliances system, the Bluetooth device is used for controlling this system from any mobile phone which have an android software facility. It is interfaced with microcontroller and android application device with the help of serial communication IC RS 232. It is powered up with 5 V dc and consist VCC, RXD, TXD, GND pins.

Triac:  It is a semiconductor material switch and mostly used in power electronics circuits for sustaining high current and voltages. Invoice controlled home appliances system,it is used at output side for power on or off the high current and high voltages home appliance. It consists of three terminals, anode, cathode and gate. The output load is controlled by giving the high or low signal at gate terminal.

Load:Invoice controlled home appliances system, the home appliances could be anything such as light, fans or geyser etc. Here we would be check this system by applying the resistive loads with different names.

This voice controlled home appliances systemworks based on that coding which we programmed in microcontroller. Here we would be understanding this system by connecting the three resistive loads with different names such as light, heater and water pump etc. We would be check this system from smart mobile phone by using google voice software. When we speak “light on” at our mobile phone form some distance which is attached with android application device through google software then this device gives the light on signal to the Bluetooth device, which is attached with microcontroller, then this microcontroller gives the high signal to optocoupler then the optocoupler gives the high signal at the gate of semiconductor switch triac. Similarly, we can switch on or off the other loads one by one by speaking “heater on” and “water pump on”. In this system, each load is configuring with different code in microcontroller. By using that codes the microcontroller switch on or off the specific load. We can alsocan also switched on or off all the loads simultaneously by speaking “All the loads on or off “at our mobile phone form any distance. Its working is so much simple and easy.