hall effect sensor Module interfacing with arduino This module is used to detect the presence of magnetic. Whenever, it will be placed in the region of magnetic field then it will detect it and will give us the output. The module consists of a hall sensor which detects the presence of magnetic field.This module can be used in many projects like making a door alarm in which whenever the door will close, the magnetic will come near to the module, so it will detect the magnet. It can also be used in making speedometer for car or a bike. If a magnet is attached to the wheel and we have place this module in the body, then we can know the time taken to complete a cycle and by doing further calculation, we can calculate the speed.

The analog hall sensor module contains a hall sensor. The hall sensor works on the principle of Hall Effect, which states the whenever a magnetic field is applied in perpendicular direction to the flow of the current, then a potential difference is induced. We can use this voltage to detect that whether the magnetic is placed near the sensor or not. 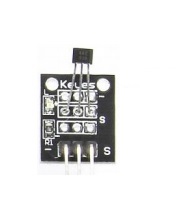 Ground: The first pin from the left is the ground pin and it will be connected to the ground of the Arduino.

+5V: The middle pin is the 5V pin and it will be connected to the +5V of the Arduino.

S: The right pin is the output pin which will give us the output whenever the magnet will be placed near it. This will be connected to the digital pin of the Arduino.

If you want to power the module from external power, then you can power it by giving 3.3 to 5V. 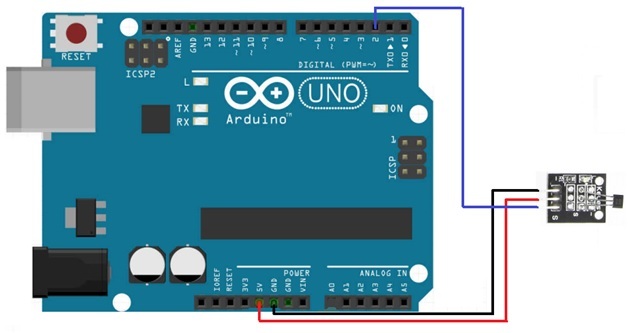 Output of the hall effect sensor will be like that

The state of the analog hall module is high

2 thoughts on “hall effect sensor with arduino circuit and code”