What is LED matrix? Led matrix is a dot matrix of large display, low resolution value and is useful for both industrial or commercial displays as well as for hobbyist human interface machines. In contains a 2-D diode matrix which have the cathode joined in rows and anode in columns. In this LED matrix each can be control individually by controlling the electricity through each pair of columns or rows diodes. These matrix are very popular matrix by means of displaying information it, allows the static and animated images and text. A LED matrix is shown in figure. 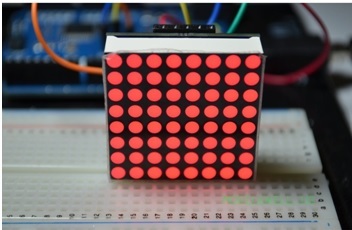 There are so many types are LED matric have been used for industrial and commercial purposes, some of which are discussing in this article with respect to structure.

In dot matrix multiple diodes are connecting together in rows and columns, this is done to minimize the number of pins required to drive the dot light emitting diodes. Suppose in 8*8 dot matrix there would be 64 I/O pins for displaying each

diode pixel. For making 8*8 dot matrix all the anodes are connecting together in rows R1 to R8, similarly the cathodes are connected together in columns C1 to C8, by doing this the required number of I/O pins have reduced by 16 shown is below:

According to the figure each LED is addressed to its row and column number. If R5 is pulled high and C4 pulled low, then the LED in fifth row and fourth column would be high, similarly the characteristics can also be displayed by scanning of each row and column.

A 5*7 LED matrix have 5 rows and 7 columns of light emitting dioses, which are connecting together for making this shown is figure in 3. According to the figure we want to display an alphabet word A then first we pulled high the column C1 and pulled low the other columns by blocking their ground paths. Now the C1 is pulled high and need to turn on the LEDs of rowsR2 to R7 of this column. This is done by the applying the forward bias voltage to these rows. Next select the column C2 and deselect the other column and apply the forward bias voltage across R1 and R5, and so on.

The construction of this display is very simple if you want to make your own prototype display then the diodes are just solder on Vero board or premade double or single sided board. Suppose we want a construct a prototype 8*8 dot matrix display shown in figure 2, then we have required 64 light emitting diodes. These diodes are solder on overboard or single sided board. The positive end of one diose is connected to other positive end of the diode for making the rows, similarly the 8 rows are made by connecting the positive end of each diode. The negative end one diode is connected to the negative end of other diode. For making the columns of this display, similarly the 8 columns are made by connecting the negative end of each diode. All these diodes are connected with each other through bare copper wire and all these are should be properly sold otherwise there would be no connection between all these. 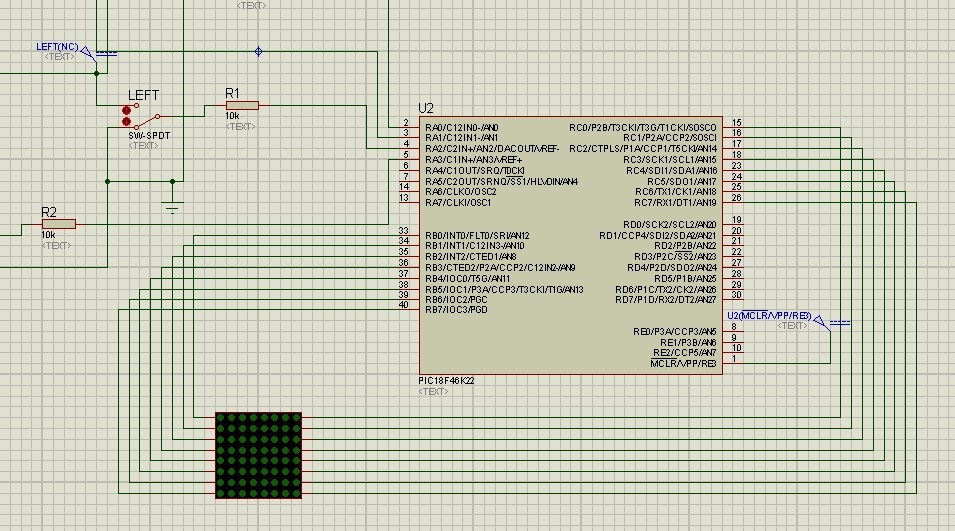 According to the figure we can see that, the microcontroller each port pin can directly drive each row or column of dot matrix display. For driving the column lines of dot matrix display the microcontroller requires additional circuit. The AT89S51 microcontroller is a high performance, low power CMOS 8-bit microcontroller which have 4k byte programmable flash memory. This device was manufactured by using Atmel s high density nonvolatile memory technology. This is compatible with the industry standard 80C51instruction.This microcontroller consist of 4 ports and 32 I/O lines. Here the dot matrix display rows are connected of port 1 and columns are connected to port 2. But columns are connected with extra IC ULN2003A.This is a high voltage (50V) high current (500mA per channel) with Darlington pair transistor array. This IC have seven channels with individually clamp output diodes. This is an active high device this means that the logic high must be applied at the input side for making the cross ponding output high. The input pins are shown with 1B,2B,3B,4B,5B,6B and 7B while the cross ponding pins are shown with 1C,2C,3C,4C,5C,6C and 7C. For displaying the alphabet,A proper code is required, which is burn in microcontroller for turn on and turn off the cross pondingLED

LED matrix display is device used for displaying the information on machine, railway departure indicators, clocks and there are so many other devices which required a simple display of very low resolution. These displays are available in different resolutions. Here we explain the applications of 2-dimensional display used in different devices.

In computer monitors the dot matrix display is used for displaying the data, picture and everything which is sending by the CPU.

It is used in that medical equipment which have the displaying facility for observing the disease conditions.

1 thought on “What is Led matrix? Types of Dot matrix display with working”