The aim of this project was to design a wirelessly controlled vehicle whose movements were controlled by the gestures of the user. 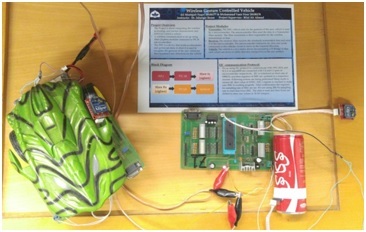 Robots has many applications in domestic as well as industrial areas. So this is useful for control of machines through gestures only. There are many people who posted articles on Accelerometer Based Hand Gesture Controlled robot . But all these people used Arduino and IR communication to send data wirelessly. But In this project, I have used Xbee module to transfer data of accelerometer to another microcontroller through Xbee module. I have also used pic microcontroller instead of Arduino. Arduino is very easy to use and there are many libraries of arduino available online. But there is not support available online for pic microcontroller interfacing with MPU 6050 6 axis sensor and also less support available for interfacing of pic microcontroller with Xbee. Therefore I decided to use different modules and different microcontroller for this project. Although it took my a lot time, but I am able to implement Accelerometer Based Hand Gesture Controlled robot successfully. 🙂

block diagram of accelerometer Based Hand Gesture Controlled Robot using Xbee is shown below. It has two parts send part and a receiver part. 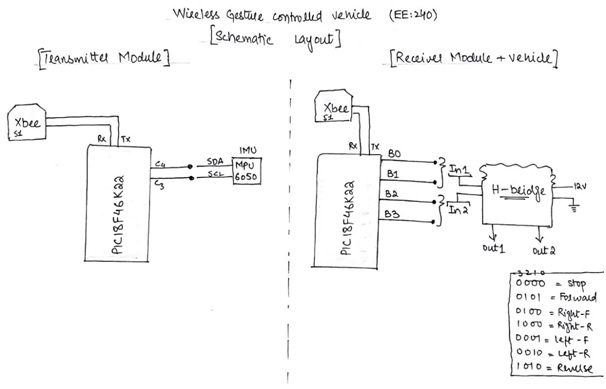 On the left hand side of block diagram we have a transmitter module and on the right hand side of block diagram we have a receiver module which is basically mounted on vehicle robot. As explained earlier transmitter module received data from MPU6050 sensor through I2C communication and microcontroller send this data to Zigbee module. Zigbee module send this data to receiver module wirelessly. As you can see, we have also used Xbee on receiver side. Both these Xbee modules are paired with each other in master and slave. Transmitter side Zigbee is used a master which order the instructions and receiver side is configured as a slave which is  used to listen to other side. Receiver side Zigbee module receives data and send this data to pic microcontroller through communication.  Pic microcontroller send signal to motor driver to drive the motors based on received data. This is a simple working of accelerometer Based Hand Gesture Controlled Robot.

Video demonstration of project is given below. If you like this project and enjoyed reading this article, please do share this with others.