Introduction to SERIAL COMMUNICATION with 8051 microcontroller

There are two methods of Serial Communication: 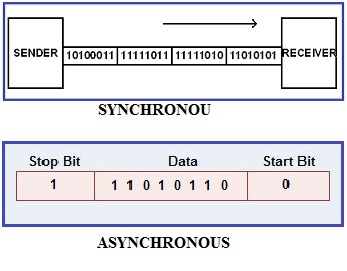 SYNCHRONOUS: Transfer the block of data (characters) between sender and receiver spaced by fixed time interval.  This transmission is synchronized by an external clock.

ASYNCHRONOUS:  There is no clock involved here and transmission is synchronized by special signals along the transmission medium. It transfers a single byte at a time between sender and receiver along with inserting a start bit before each data character and a stop bit at its termination so that to inform the receiver where the data begins and ends. An example is the interface between a keyboard and a computer. Keyboard is the transmitter and the computer is the receiver. We use USART and UART for serial communications. USART or UART is a microcontroller peripheral which converts incoming and outgoing bytes of data into a serial bit stream. Both have same work but with different methods which is explained below.

USART stands for Universal Synchronous/Asynchronous Receiver-Transmitter. USART uses external clock so it needs separate line to carry the clock signal. Sending peripheral generates a clock and the receiving peripheral recover from the data stream without knowing the baud rate ahead of time. By use of external clock, USART’s data rate can be much higher (up to rates of 4 Mbps) than that of a standard UART.

It stands for Universal Asynchronous Receiver-Transmitter. A UART generates its internal data clock to the microcontroller. It synchronizes that clock with the data stream by using the start bit transition. The receiver needs the baud rate to know ahead of time to properly receive the data stream.

There are 21 Special function registers (SFR) in 8051 microcontroller and 21 unique locations are for these 21 SFR. Each of these register is of 1 byte size. The “Serial Control” (SCON) is the SFR which is used to configure serial port.

TI:                   Transmit Interrupt flag
Set by hardware when a byte is transmitted completely. Now the port is free and ready to send the next byte. This bit must be cleared by software.

RI:                  Receive Interrupt flag
Set by hardware when a byte has been completely received. This lets the program to know that it needs to read the value quickly before another byte is read. This bit must be cleared by software.

SM2 is a flag bit for Multiprocessor communication. When SM2 is set, the 8051 microcontroller will set the RI (Receive Interrupt) flag whenever a byte is received (if the 9th bit received is “1”).  By this way, program knows that a byte has been received and it needs to be processed. If 9th bit is clear, the RI flag will never be set. We will clear this RI bit so that the flag is set upon reception of any character.

REN is Receiver Enable bit. Set this bit if we want to receive data through serial port.

It is defined as number of bits transmitted or received per second and is usually expressed in Bits per second bps. After setting the operation mode of serial port, the program must configure the serial ports baud rate which is only applicable to Serial Port modes 1 and 3. For mode 0 and 2 oscillator frequency determines the Baud Rate.

Baud rate is always the oscillator frequency divided by 12. For crystal of frequency 11.059MHz, Baud rate will be 921,583 baud.

Baud rate is always the oscillator frequency divided by 64. For crystal of frequency 11.059MHz, Baud rate will be 172,797 baud.

How to calculate baud rate for serial communication in 8051 microcontroller

Let us take an example. If we have crystal of frequency 11.059MHz and we want to configure the serial port to 19,200 baud rate, firstly we try equation 1. By using equation 1:

By setting 254 and 255, we don’t achieve accurate baud rate so we need to set PCON.7 (SMOD=1). This doubles the baud rate and we will use equation 2 for determining TH1 value. By using equation 2:

If you do not want to do complicated programming using serial communications registers, you can simply use Mikro c compiler which has built in libraries for the UART communication. Now I will explain about UART programming through mikro c and after that I will provide an example of UART in keil compiler.  We can use built-in UART library for handling 8051 serial communication, there are several functions. In this library.

In above we are transmitting data through UART port and also displaying same data on LCD. If you don’t know how to display data on LCD, you can check tutorial here. Now lets see the explanation of code.

By pressing key 1, 1st LED will glow and when key “a” is pressed, it goes off.

By pressing key 2, 2nd LED will glow and when key “b” is pressed, it goes off.

By pressing key 3, 3rd LED will glow and when key “c” is pressed, it goes off.

By pressing key 4, 4th LED will glow and when key “d” is pressed, it goes off.

The virtual terminal will also show the ON and OFF of LEDs.