Introduction to auto indexing in Labview

Using loops in LabView you may have noticed and whenever you place an outgoing wire through a loop, the tunnel is either solid or have square brackets on them. What do these differences in the tunnels represent?When you have small brackets inside the tunnels, auto-indexing is enabled. This setting is unique in all versions of LabView using either for loop or while loop. LabView also sets the count terminal to the array if you enable auto-indexing on an array wired to a For Loop input terminal, so you do not need to wire the count terminal.

The output array receives a new element from every iteration of the loop, when you auto-index an array output tunnel. Hence the size and number of iterations of the auto-indexed output array are always equal. Last iteration data will be received if you disable auto-indexing in the output tunnel and not the elements individually. You can also change this setting by clicking right on the tunnel and select Disable Indexing or Enable Indexing.

When working with while loop auto-Indexing is disabled by default, so the wiring tunnel will be solid. The while loop indexes of the array work in the same manner as that of for loop when you enable auto-indexing for an array entering a While Loop. While loop iterates until a specific condition is satisfied, therefore, the number of iterations a While Loop executes is not limited by the size of the array. The output array receives a new element from every iterations when you auto-index an array output tunnel.

Figure 12: Looping through an array output

Compare both arrays element wise. Both have same digits except the number 5. The decimal portion of all elements of both array are same. Second for loop installed, loops through the first array element wise, add five to it, and store it in another array named array 2.

The bracket, at the output of the loop boundary, appears because auto-indexing is enabled in for loops by default in LabView. You can also disable auto-indexing. For this purpose right click on the tunnel, a drop down will appear, from that select tunnel mode and then select the one you want your tunnel to act the way, see the figure below. 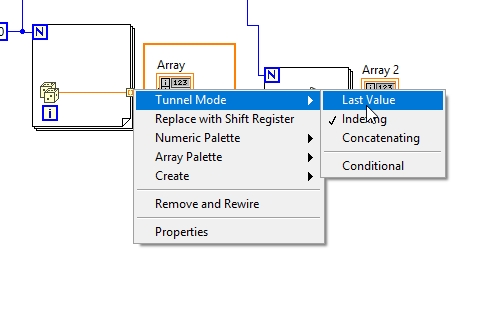 (Hint: In while loop, auto-indexing is not enabled by default in LabView)