STEPPER MOTOR INTERFACING WITH 8051 MICROCONTROLLER: Stepper motors are type of DC motors. Stepper motor has multiple electromagnetic coils that are arranged in group called phases. Motor rotates when particular phase is energized. One step rotation occurs at a time by energizing a particular coil. We can also control the speed of motor. It can be interfaced with 8051 microcontroller but the same case is here about DC motors that we can’t connect them directly with controller. Here in this article we will learn how to interface stepper motor with 8051 microcontroller. Before starting this article you should know how to use keil for 8051 programming and how to use input output ports of 8051 microcontroller.

Unlike DC motors, the current consumption of stepper motors does not depend upon the load. Upon no load they still draw much current. In this way, they get hot and this lowers their efficiency. In stepper motors there is smaller torque at high speeds than at low speeds. But mostly these stepper motors are used in high speed routine. For obtaining that high speed performance they need to be paired with a proper driver.

Stepper motors are used because of their:

Stepper motor is brushless which take digital signals. It converts digital pulses into mechanical shaft rotation. Rotation is divided into steps and a separate pulse is sent for each step. For each pulse motor rotates a few degrees which is mostly 1.8 degree angle. As we interface it with controller, so when digital pulses increase in frequency, the stepping movement of motor converts to continuous rotation of motor. So we can say that speed of rotation is directly proportional to the frequency of pulses given by controller.

For a two phase stepper motor, there are two winding arrangements of electromagnetic coils.

Since each drive has its own advantages and disadvantages, thus we choose the drive according to the application we want and power consumption.

Due to high voltage and current limitations of microcontroller, a motor Driver IC is used. We can use L293D or ULN2003. Working of both is already described in previous articles. 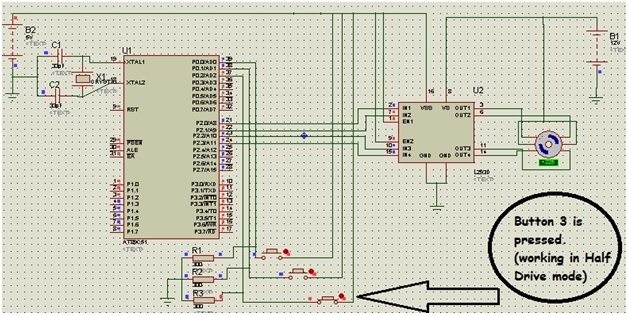 I tried to use all three modes. When I press button 1, it works as wave drive. Only one electromagnet is energized at single time and in coding one pin is high at a time. When I open the switch/button, motor tends to stops and gets stop within few seconds.

When I press button 2, it works as full drive. Two electromagnets are energized at single time and in coding one pin is high at a time. When I open the switch/button 2, motor tends to stops and gets stop within few seconds.

When I press button 3, it works as half drive. One and two electromagnets are alternatively energized at a single time and in coding:

When I open the switch/button, motor tends to stops and gets stop within few seconds.