In this tutorial I will explain you the working of a simple digital system known as a digital encoder. At the start a brief and concise introduction to encoders specifically a simplest 4×2 encoder is provided with the explanation of the output they will show. An encoder is the opposite of a decoder or a multiplexer. It is used to encode the numbers into binary digits as you will see shortly. After that the circuits is simulated using PSPICE and the result are compared with the theoretical discussion provided (which should be same). You are provided with an exercise to do it by yourself, at the end of the tutorial and in the next tutorials I will assume that you have done those exercises and I will not explain the concept regarding them.

An encoder in its simplest terms is a circuit, a device, a software program or a person that can convert information from one format or type to another. In digital world, however, encoders are named as devices which can change the binary digits from one format to another. The block diagram of a simple 4×2 encoder is shown in the figure below,

This encoder will encode a four-bits binary number in two-bit binary number. The internal diagram of a simple 4×2 encoder is shown in the figure below, 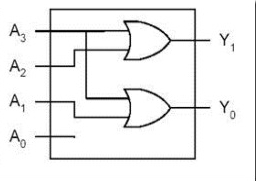 If the value of A0 is 1 then then output will represent a binary 0 and if A1 is 1 and all others are zero, then the output will be a binary 1. The truth table of a 4×2 encoder is shown in the figure below, 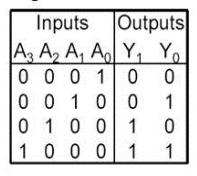 Figure 18: Attributes of A0

Figure 19: Attributes of A1

Figure 20: Attributes of A2

Figure 21: Attributes of A3

Figure 25: Output of the encoder

If we compare the output of the encoder with the truth table they both will be same.