Optocoupler is basically used for isolation/protection in power electronics devices. It is used to isolate high voltage side from low voltage side. As I mentioned earlier, it is also used to avoid back emf effect to microcontrollers.  Back EMF effect occurs only in inductive devices like motors etc. There are many types of Optocoupler available in market. Let us see how we interface the microcontroller to  a AC load.  To interface AC load with microcontroller, we need a optcoupler.  We have an Optocoupler MOC3041.  You can also use following optocouplers. 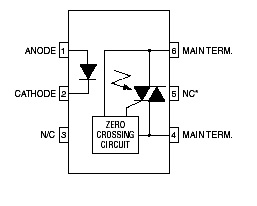 Pinout of MOC3041 optocoupler is shown above.  Input side has a light emitting diode. Pin number 1 is anode of LED and Pin number 2 is cathode of LED. When LED is on, it emits light and light falls on light sensitive triac. Triac turns on when light falls on it. Because MOC3041 has built in zero crossing detector circuit inside it, triac will turn on at every zero crossing of AC power supply only. Zero crossing switching has many advantages in power electronics circuits which I can not discuss here and it is beyond the scope of this article. I will try to write a separate article on it. So to connect ac load with microcontroller, we connect MOC3041 optocoupler between ac load and pic microcontroller as a isolation.  Complete interfacing diagram is shown below.

How to interface AC load with any microcontroller

So in the event of using this IC with micro controller we have connected one LED  and current limiting resistor in series to understand that what will happened when current goes high and current goes low. Led  is also used to show the indication of working of circuit. This may or may not be used but this gives a good indication that the current is flowing through the internal LED.  we are not able to see the light of internal  LED of optocoupler  which will be ultimately falling on photo sensitive triac. When light  falls on photo sensitive triac, triac will start conducting. We can turn on and turn off the internal LED of optocoupler with the help of digital output pin of pic microcontroller. If you don’t know how to use input output ports of pic microcontroller, I recommend you to read this article:

As shown in above diagram when we give high signal to input of optocoupler MOC3041 from microcontroller output pin, internal light emitting diode will start glowing and light of LED will fall on photo sensitive triac and triac will turn on. When triac start conducting, current will flow from ac supply to ac lamp. This is how we can interface ac load with microcontroller through optocoupler and triac. 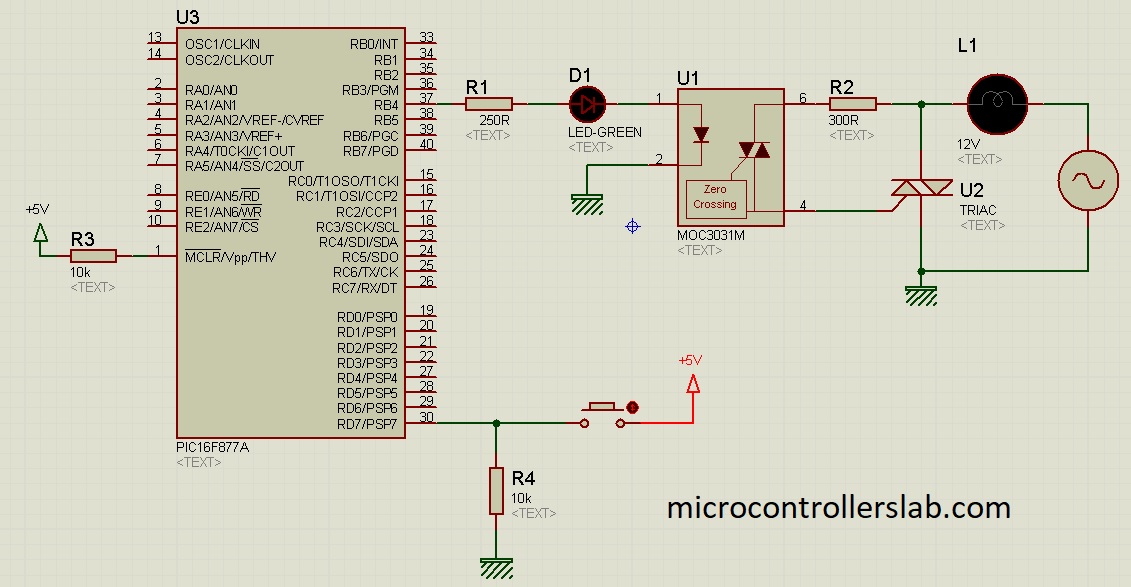