Following is a pin mapping of with ESP32 devkit DOIT board. Although ESP32 chip ADC1 has eight channels, Devkit DOIT board supports only 6 channels. But still, we have enough analog channels for analog sensor interfacing.

Although we have 10 analog channels available in ADC2, all these channels are shared among other resources. For example, ADC2 is shared with WiFi drivers, therefore you can only use it after WiFi drivers are not started. You have to make your program smart enough to switch between two resources. The easy way is to turn off the WiFi driver when you want to use ADC2 and read the analog value and after that turn on the WiFi driver when you want to update value to the server etc. I will explain more about it in later parts of this series of tutorials. The figure below shows the pins of analog channels on Devkit DOIT:

How to use Analog to digital converter channels of ESP32

You may like to check our previous project on high voltage measurement with other microcontrollers. Although a different microcontroller is used in these projects, you can apply the same concepts to ESP32 ADC for measurement of current, voltage, power factor and ac power.

One main disadvantage of ESP32 ADC is that it has a non linear behavior. Graph below shows its non-linear curve. you can find more information about it on this link. 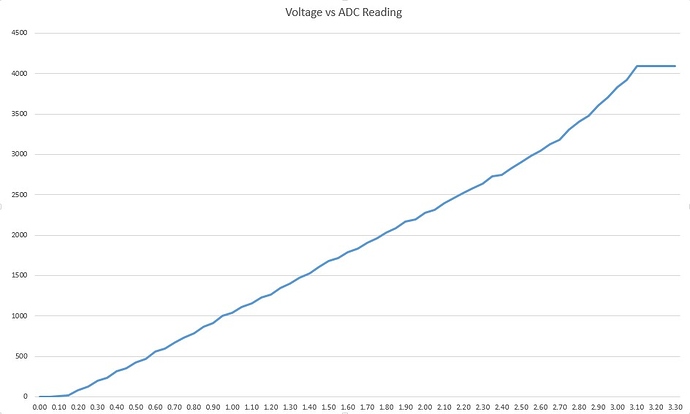 So we are using Arduino IDE in these tutorials.  Arduino IDE provides built in function to read analog values that is analogRead function.

If you are just getting start with ESP32 programming, check these earlier tutorials:

Now make this circuit diagram on your bread board and after that, we will write a code to measure voltage using a variable resistor.

Code for analog voltage measurement is shown below. All the functions used in this code have already explained in the previous tutorial and in this tutorial except serial.begin() and serial.println() functions.

Now the main function of this code is a loop part where we are taking an analog input and displaying it on serial monitor of Arduino IDE with the help of these lines.  serial.print function is used to transmit data without a new line at the end and serial.println() function is also used to transmit data but it also includes new line character at the end of the string. After that delay function is used to add a delay of one second. It is not necessary to add delay but we did it check to receive value after every one second.

Now in the last part, the first line will convert the digital value of ADC_VALUE into voltage.  ADC_VALUE is multiplied with a resolution of ESP32 ADC which is 3.3 / 4095. Resolution is also know as a minimum step of adc for each corresponding value of voltage. For example, if ADC_VALUE counts 10, its mean it has taken 10 steps or value at the input pin is 10 times the resolution of adc.  So to convert ADC_VALUE back into voltage we simply multiply it with resolution as we done in the first line.  After that Serial.print function sends a string of “voltage = ” and then voltage value and after that unit of voltage is transmitted to the serial monitor.

So when you run this code on ESP32 board, you will get the value of adc and voltage value after every one second on serial monitor of Arduino IDE. you can also check ESP32 Webserver tutorial.