INTRODUCTION TO PIC18F4550 MICROCONTROLLER: The PIC18F is one of the families of pic microcontrollers and PIC18F4550 is its member. PIC18F4550 is one many of the advanced microcontrollers from the microchip era. This microcontroller is very famous in between hobbyist and beginners due it functionalities and functions along with ADC and USB integration. There are different packages like DIP, QPF, and QPN of PIC18F4550 which are currently available. 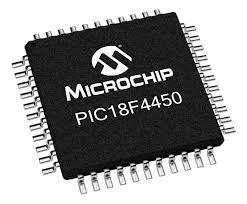 Pin out of PIC18F4550 microcontroller

Pin diagram of this microcontroller is given. It has 40 pins.

Besides its availability as a clock source, the inner oscillator block presents a strong reference source that offers the own family extra functions for strong operation:

OTHER SOME SPECIAL FEATURES

Check this complete tutorial on tutorial on how to use PIC18F4450 microcontroller ADC with programming in MPLAB XC8 Compiler:

PIC Microcontroller ADC – How to Use PIC18F4550 ADC

The PIC18F4550 consists of up to 13 channels for analog to digital converter. The converter accuracy quantities to ten-bit to convert analog to digital sign particularly. It is well matched to work with unique inner and outside clock resources. It comes with 4 built-in timers or an external oscillator may be interfaced for clocking. The frequency range is from 31 kHz to 48 MHz respectively. The microcontroller PIC18F4550 comes with ADC comparators and different such peripherals.