PIC Microcontroller LED vs Push-button use

Before we see how to interface an LED with pic microcontroller, we need to understand some basics of a light-emitting diode such as its current and voltage requirements. How much does it require to turn it on? What is the forward voltage rating of an LED?

It consists of two terminals namely anode (+) and a cathode (-). As its name suggests, it is a light source that emits light when we apply a voltage across its terminal. We usually use it as an indication signal in embedded systems projects. For example, it is used to indicate either power is applied to the circuit or not. Some other applications are:

This picture shows an electronic symbol and a physical diagram of light-emitting diodes. As you can depict from the diagram that it consists of two-terminal such as anode and cathode. An anode is a positive terminal and we connect positive terminal of power supply to this terminal. Similarly, we connect the negative terminal with the cathode.

While using an actual LED, we can find cathode and anode terminal in two ways. 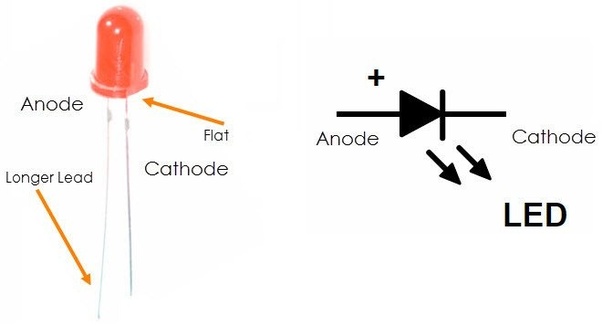 For example, if we use a RED_LED that has a brightness of 5MCD, it will operate at 10mA current.

Note: millicandela is a light intensity unit that is used to measure light brightness.

Therefore, we can conclude from the above table that the average forward voltage drop is about 2V. The typical forward current is about 10mA. But, there are a small size (1MM) LEDs also available in the market that can operate even at 1mA. But you should select the device according to your brightness requirement. 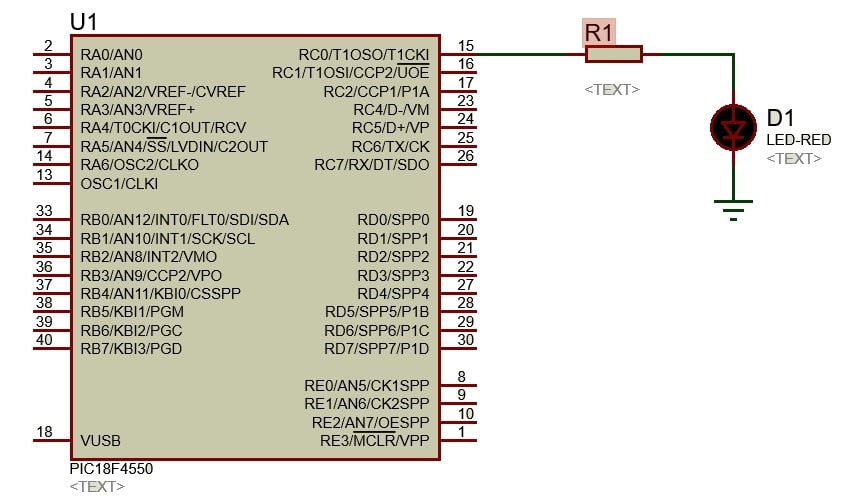 Let’s assume that the forward current is 10mA. But you can always find a peak forward current value from the datasheet. We can easily calculate the current limiting resistor value (R1) by using this equation:

We can easily find a resistor value close to 300Ω in the market.

Why Do We Need A Current limiting Resistor?

After watching this video and reading the above article, you should know how to create a new project with MPLAB XC8 and how to set configuration bits of any Pic microcontroller ( PIC18F4550). In this example, we use the PIC18F4550 microcontroller for LED controlling demonstration.

This circuit shows a connection diagram of PIC18F4550 with an LED. We connect LED-RED with PORTC pin RC0 through a current limiting resistor R1 (330Ω). 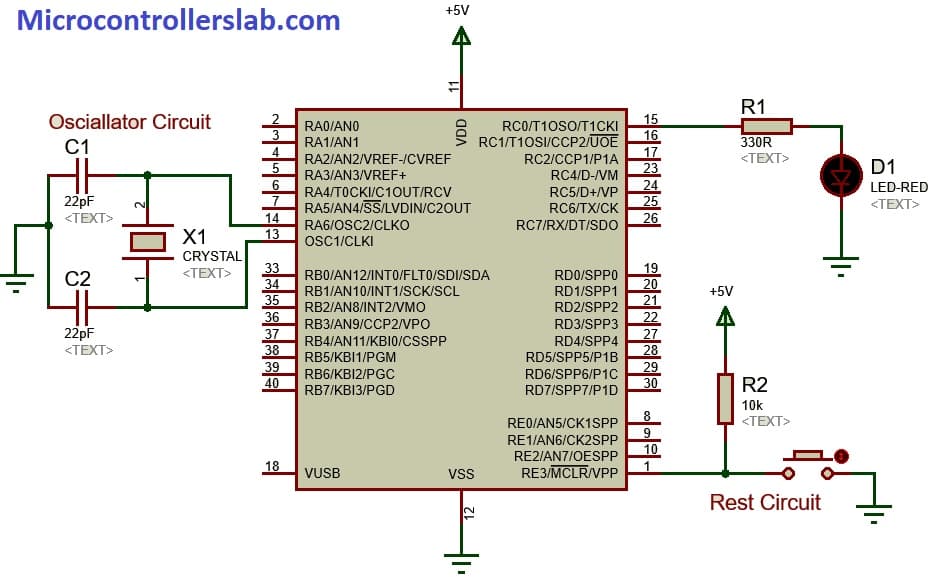 Now let’s see an LED blinking code in MPLAB XC8 compiler. Like every PORT of PIC18F4550, PORTC is also a 7-bit bidirectional port. Each pin can be used both as a digital input or a digital output. These three registers are associated with PORTC:

We can also access individual bits of TRISC register in MPLAB ana configure some pins as input and some as an output.

The Data Latch register (LATC) is also memory mapped with PORTC. Every read-modify-write operations we perform on the LATC, it latches the value on PORTC.

PIC18F4450 microcontroller PORTC is a multi-function port. All pins are shared with other modules such as ESUART, USB, I2C, and SPI communication modules, expect RC4 and RC5 pins.

Note: RC4 and RC5 pins can be used only as digital input pins only. Because internally there are not TRISC bits associated with them.

This code blinks an LED with a delay of one second.  __delay_ms() function used to define a delay in milliseconds.

We can also interface multi-color or RGB devices with pic microcontroller. Read this post:

This section describes a LED sequencer circuit designed using a pic microcontroller. The sequencer circuit generates a blinking pattern sequence with a specified pattern. As you can see in this circuit, it blinks alternate LEDs with a sequence of one, two and three respectively.

In this circuit, we use PORTD and eight light-emitting diodes are connected with this PORT through current limiting resistors. This is a complete code in MPLAB XC8 compiler.

Now let’s see the working of code. First of all, led_sequence(char get) function used to right shift and left shift values passes to this function as an argument. First ‘for loop’, sends the value to PORTD eight times with the delay of 200 milliseconds. After every repetition of the ‘for’ loop, it also left shift data by one bit.  Similarly, second ‘for’ loop, send data to PORTD seven-times by shifting data one bit toward right.

These lines send value to the sequence function.

In this section, we explain how to interface an LED with a pic microcontroller and programming using MikroC Pro for pic compiler.

For this example, we will demonstrate the working of an LED Blinking circuit using the PIC16F877A microcontroller. The circuit diagram and the simulation will be done in Proteus.  The following circuit diagram shows we have connected LED with pin number one of PORTC. A resistor is used as a current limiting resistor. Because the maximum current a single pin can provide to LED is 5mA. 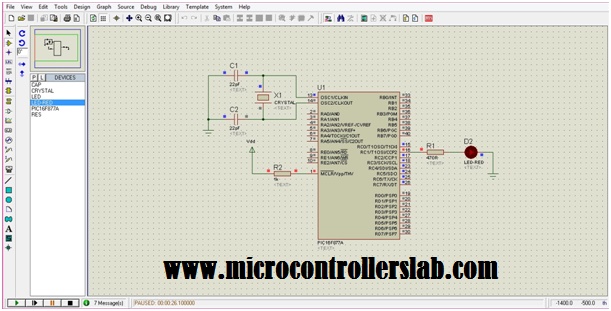 To simulate the circuit as per our desired function i.e. for the LED to blink, the microcontroller PIC16F877A needs to be programmed with a relevant C-code. Write the following LED Blinking code in the mikroC compiler. If you don’t have experience with MikroC pro, you can read this post:

The while loop will execute infinite times. The LED connected to pin RC1 of PORTC will keep on blinking with a 1-second delay (1s=1000ms).TRISC in instruction 2 configures PORTC as an output port. Pin1 of PORTC is set to 1 (HIGH) in instruction 4 and after a delay of 1000ms, it is set to 0 (LOW) in instruction 6. This process is repeated until the program is aborted. This causes the blinking of the LED. The speed of the Blinking LED can be increased or decreased by varying the delay value.

There are several applications of blinking or flashing light. A flashing emergency LED light is used for capturing the attention of the masses as it makes people look up and pay attention to more consideration. Also, the devices installed on telecom sites, use a blinking LED to ensure that the communication is in progress.