This tutorial is designed for beginners who are new to the world of Microcontrollers, to provide a little know-how about the technology. PIC (Peripheral Interface Controller) family is popular among students, hobbyists and also industrial developers due to its low cost, serial programming capability and its ease of availability. The 8-bit PIC microcontrollers are divided into four large families based on their built-in special features:

Although, Microchip also provides advances series of microcontrollers also such as PIC32, PIC24, and DSpic. But if you are a newbie in this field, we recommend you to start with PIC16 or PIC18 series.

How to Start Learning Pic Microcontrollers?

To dive into the learning process of Pic microcontroller, we first need to select a microcontroller.  We should always pick a simple (Low pin count and less number of peripherals) and famous microcontroller. Because we can easily find a lot of resources and online forums support if you face any issue and difficulty.

Let’s just take the example of a single PIC microcontroller from the PIC 16FXXX family for this document. At the end of this document, you would have gained enough knowledge to work with the other standard MCUs of PIC16FXXX family as well, as they all have similar architecture. We will take the example of PIC16F877A microcontroller. Because this is one of the most popular MCU of Microchip company.

PIC16F877A is one of the most widely used controllers. The pin configuration of the MCU and some of its functions are illustrated below. It is a 40-pin DIP Microcontroller (also available in other packages). 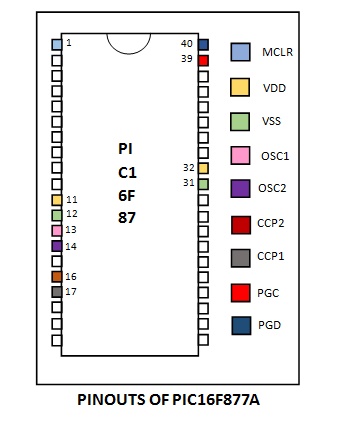 First, you should check Vdd( Power supply) and Vss(ground) pins of the Pic microcontroller. Two pins are usually used to provide voltage supply. As you can see from the above pinout diagram of PIC16F877A microcontroller, pin11 and pin32 are Vdd pins. As per the datasheet, we can connect a power supply of +5 volts to these pins. Make sure to use a less noisy and stable supply to give power to the pic microcontroller. 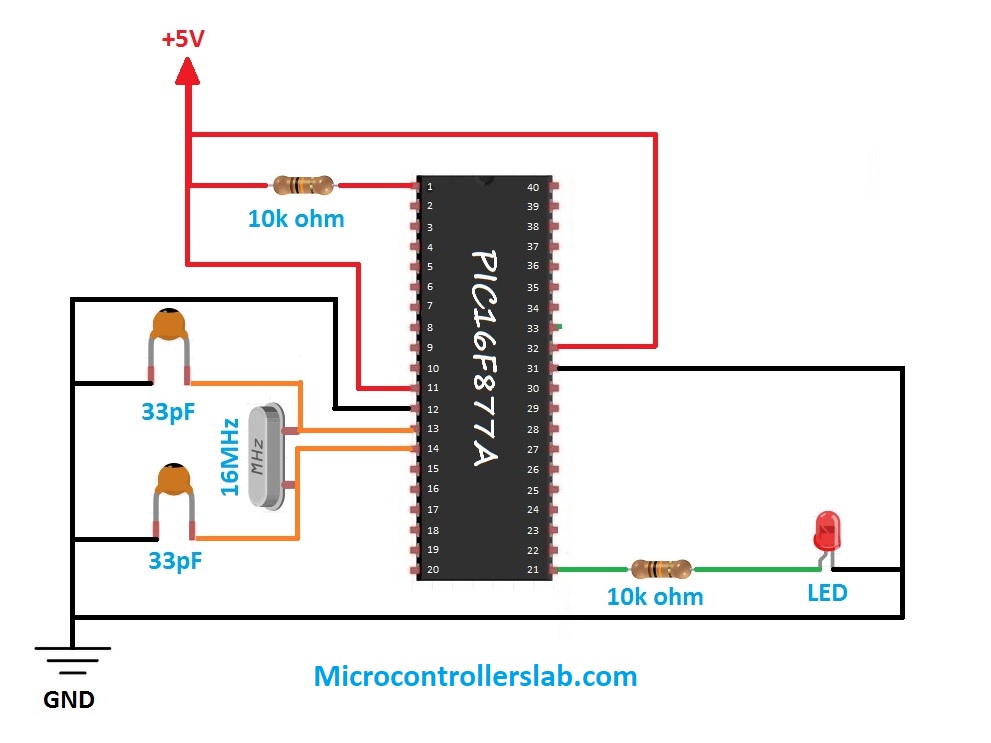 Vdd (pwr) and Vss (ground) need to be hooked up with power and ground respectively. Pin 1 is the MCLR pin for the program restart feature. It must be tied to the Vdd with a pull-up resistor in between. Since PIC16F877A does not have an internal oscillator so you need to have an external crystal connected across pin 13 and 14.

There are 5 ports in PIC16F877A with ports A and E having fewer pins than ports B, C and D. These are called the digital I/O pins.CCP1 and CCP2, shared with the I/O pins RC1 and RC2, can be used to generate PMW signals with the microcontroller. PGC and PGD pins are used for programming and debugging. This information comes in handy when writing the programming code.

PortB is a bi-directional port, having 8-bit (B0-B7) and TRISB is its data direction register. A bit in PortB is set as input if its corresponding TRISB bit is equal to 1. Whereas if the TRISB bit is cleared, then the corresponding PortB bit will be set as output. RB6 and RB7 are multiplexed with the PGC and PGD functions that are used for programming and debugging.

PORTD is also an 8-bit, bi-directional port. Each pin in PortD is individually configurable as input or output. It can be configured as a Parallel Slave Port if the 4-bit of TRISE (PSPMODE) is set to 1.

PORTE has only 3-bits (E0-E2) which are also individually configurable as input or output. All 3 PORTE pins are multiplexed with analog inputs.

Now you know about input-output pins of PIC16F877A. Now we recommend you to read this LED blinking tutorial:

Two of the most popular compiler that is used to write program for microchip MCUs are MPLAB XC compilers and mikroC Pro for PIC. You can use any compiler. But if you are just getting started, we recommend, mikroC for pic because of its ease of use and built-in libraries. You can read these articles on both compilers:

PIC Microcontrollers have a built-in precise timing system called timers/counters which can be used to perform several tasks such as generating timing signals, calculating the span of an event, keeping a record of date and time and so on. Since the counter runs independently, it can count the instruction cycles simultaneously with the main program execution. PIC16F877A consists of 3 timer modules:

This tutorial gives you the basic knowledge required to get started with PIC Microcontrollers.

1 thought on “Getting Started With PIC Microcontrollers”