MQ-2 gas sensor or  Smoke detector interfacing with pic microcontroller. How to design smoke detector circuit using pic microcontroller? In this tutorial, you will learn how to interface smoke detector. Smoke detector sensor is used to detect the presence of smoke and gas in surrounding.  It is also used to detect gas leakage detection in household and industrial equipment’s. MQ-2 smoke sensor or gas sensor is suitable for detection of Hydrogen, methane and LPG related gases. In short, it can detect combustible gases. It has a wide operating detection range. It has very high sensitivity and very fast response rate.  It can even be used in harsh environments. So you can easily use it detect the presence of gas or smoke in your surrounding. There are many smoke detector circuits available in market. But all these sensors are expensive. 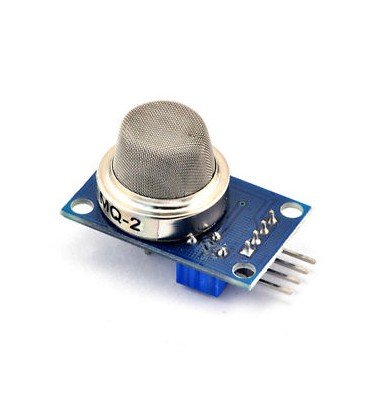 But if you want to have a gas detector circuit for your home or office in very low price, you can build it yourself using this simple MQ-2 smoke sensor. In this tutorial I will show you, how you can interface MQ-2 smoke or gas sensor with pic16f877a microcontroller. You can also use it with other microcontrollers like Arduino Uno R3 or any other. I will already posted a article on smoke detector interfacing with Arduino. You can check it below:

It has many application but some of them are given below:

So now lets start with the introduction of MQ-2 smoke sensor. The sensitivity material used in this sensor is SnO2.  It offers low conductivity in air when there is no gas present in air.  If there is a combustible gas presence in the air, MQ-2 gas sensor offers high conductivity. The conductivity depends on the concentration of gas presence in the air.  The sensor module we are using in this tutorial has on board electronics circuit as well which converts this change in conductivity to a output voltage of the sensor. So we will using this output voltage as reference to assure presence or absence of gas in air. I will explain it in more details in working part of this article.

Pin out of MQ-2 gas sensor

Pin out of MQ-2 gas sensor is given below: 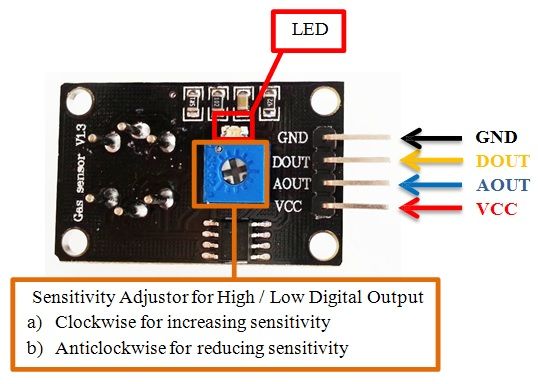 As I explained earlier, MQ-2 smoke sensor offers low conductivity when no gas present in the air and it offers high conductivity when any combustible gas is present in the air. The module we are using in this tutorial as shown in above picture has on board electronics circuit which provides this conductivity in the form of voltage output. When there is no has present in the air, voltage at the output of AOUT pin will be low and when there is a gas present in the air, voltage at the AOUT pin will be high. So we will use this AOUT output pin to detect the presence of gas in air. This sensor also has digital output pin that is DOUT.  There is a on board variable resistor in this sensor which is used to set the sensitivity of sensor. If you rotate the variable resistor clock wise, it will increase the sensitivity of sensor and if you rotate the variable resistor anticlockwise it will reduce the sensitivity of sensor. We are using analog output pin in this tutorial, so we need to measure voltage across AOUT pin. So We will connect AOUT pin to analog channel of pic microcontroller. So now lets see how to interface MQ-2 sensor with pic microcontroller.

Code for this tutorial is given below. You just need to upload this code to pic microcontroller and test your working circuit.

So this is all about how to interfacing smoke sensor MQ-2 with pic microcontroller. I hope you liked this tutorial.