This tutorial is an introduction to PIC16F84A microcontroller. We will talk about pinout, main features, different GPIO ports, How to use these input outputs pins to blink an LED or control a switch button and how to use timers of PIC16F84A. Let’s start with history of these microcontrollers.

This is an 18 pin IC, the description of each pin are given below: 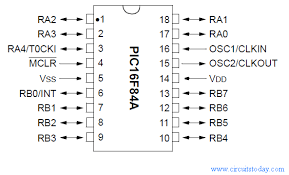 These 13 GPIO pins can be independently configured either as digital input or as digital output. Also, each pin can either supply or can absorb a maximum of 25mA current per pin. So, accordingly, every pin can drive a LED easily but cannot drive any dc motor or relays. Because, current requirement for LED is generally less than 10mA and dc motor requires greater than 25mA.   If you want to interface relay or dc motor, you have to use current driver ICs. Like  motor driver IC to interface motor and relay driver IC to interface single of multiple relays.  The mentioned 13 I/O pins are assembled into two groups known as ports.

I/O Pins: There are 13 I/O pins and these pins can be configured individually either as input or as output. Each of these pins source and sinks 25mA current.

Supports ICSP: ICSP stands for In-Circuit Serial Programming. With little careful, you can program the microcontroller deprived of eliminating it from the target board for example in-circuit. This is widely used for in-circuit programming as it contains a USART module.

PIC16F84A Memory: This PIC microcontroller comes with enhanced EEPROM memory. It contains 64 bytes memory that is mainly used to store data and 1K program memory specifies the capacity of code you can burn inside. 68 bytes of RAM (Data Memory).

Watchdog timer: This microcontroller has built-in Watchdog timer. There is an internal timer located under the chip. You can make this timer enable or disable by programming. The timer is mainly used to rest the microcontroller when the program goes wrong or it may enter to the infinite loop.

Registers: There are two types of registers which are as follow here.

Timer: PIC16F84a contains one 8-bit timer that can be utilized in both ways i.e. timer and counter. Furthermore, accompanies internal and external clock select capability.

Sleep Mode: This mode is included the chip that produces a low current power down mode. The sleep mode can be removed using an interrupt, external reset, and watchdog timer.

Power on Reset: This feature is utilized in various other PIC microcontrollers when it is powered on. If there arises a problem in the chip, powering on the device will dismiss it from the loop of any malfunctioning in the device.

PIC16F84a Projects: This version of PIC controllers are mostly used in students projects where the main concern is automation. This is also used in Central heating projects, Production of the temperature data logger, and gas sensor projects. Also used in security systems and setting up serial communication with other devices.

Compilers: PIC controller has different compilers MPLAB C18 Compiler and MikroC Pro for a compiler. The code written in the compiler creates a hex record that is transferred on the PIC Microcontroller.

Ram Memory Banks: the RAM is consist of four banks. Before accessing any register during the time of programming or program writing, you must need to select the particular bank which contains that register. Handling banks may be steep if you write the code in assembly language.

This circuit is designed with proteus. We can use proteus for simulation of microcontrollers. you can check these proteus tutorial.

There are two registers used for GPIO pins of PIC16F84A and these registers are also same in almost all microchip family of 16F and 18F.

Here TRISB define PORTB direction control register and B0 defines pin number zero or RB0.  Initializing any pin with zero using TRISX register will declare it a digital output and if you initialize it as with 1, it will declare it as pin as a digital input pin like this:

Some more example for your understanding:

Now, if you want to make digital pin logical HIGH, you simply assign it as value 1 and otherwise 0. Like following examples.

This sketch will make the LED toggle with a delay of once second.

This is a example code to connect 16×2 LCD with PIC16F84A microcontroller in 4 bit mode.  Connection diagram is shown here.

How to use External interrupt

This example is about using external interrupt pin of PIC16F84A microcontroller. RB0 pin is used to read external interrupts. Microcontroller keep executing its sequential code and based on the request of interrupt, it will turn on the LED and after it receive interrupt again, it will turn off the LED.  Interrupt will occur on positive edge. But it can configured for negative edge also.

How to use TIMER0 interrupt

Some Other Features of PIC16F84A microcontroller