PIC Microcontroller Comparator: If we talk about the comparator in electronics language, then it is an analog device, which compares the two signals that could be in the form of voltage or current. In these two signals one may be a triangular wave, saw tooth wave or any other wave and second one may be steady state dc voltages or any other and for comparing these two signals the voltage level of both should be different. The output of the comparator is digital signal which shows, which one is large. The analog comparators are used in many applications. Here we would be talk about the comparator, that is built in pic microcontroller for multiplexing or comparing the inputs with the I/O pins, which saves the cost and make easy to design.

The PIC microcontroller consists of a CMCON control register, which have seven bits shown in figure

Bit 5,4 (U-0, U-0): These are the unimplemented bits, during the working of comparator, the control register reads these bits as a 0.

Bit 3 (CIS): This bit is actually control input switch, which is used for controlling the input, output modes of comparator. 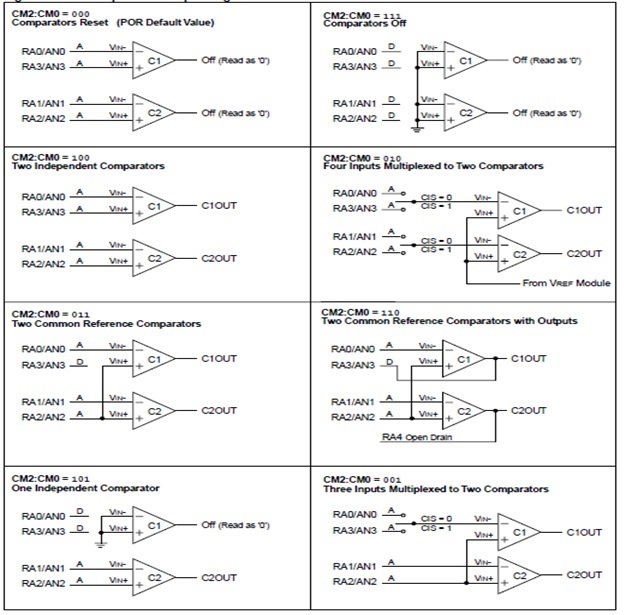 Mode 1: In mode one, the both comparators would be reset and for reset the comparators, the digit 0 0 0 is applied on bits 2,1 and 0.

Mode 3: In mode three, the both comparators would be act independently and for this mode the digits 1 0 0 is applied on bit 2,1 and 0.

Mode 4: In mode four, the both comparators work in multiplexing mode, means the four inputs are multiplied into two input and for this mode the digit 0 1 0 is applied on bits 2,1 and 0.

Mode 5: In mode five, the both comparators use common reference signal and for this mode of operation the digit 0 1 1 is applied on bit 2,1 and 0.

Mode 6: In mode six, the both comparators use the output signal as a reference signal and for this mode of operation the digit 1 1 0 is applied on control register bits 2,1 and 0.

Mode 7: In mode seven, the one comparator works independently and second comparator is connected to the ground and for this mode of operation the digit 1 0 1 is applied on control register bits 2,1 and 0.

Mode 8: In mode eight, the two comparator work in multiplexing mode, means in this mode the comparator multiplexes three inputs into two input and for this mode of operation the digit 0 0 1 is applied on control register bits 2,1 and 0.

A single pic microcontroller comparator along with two analog inputs, which have different voltage level and one digital output is shown is figure 3 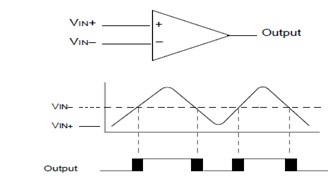 Time response is the minimum amount of time, which is required to show the guaranteed digital output of comparator after selecting a new reference signal or source voltage. If the internal reference signal is changed, then the settling time also should be considered for desired output. Otherwise the microcontroller’s compotator time response can be used.

According to the figure the analog inputs are connected to the digital outputs, which have the reverse biased diode. The analog inputs must be attach between the VDD and VSS.  In case, the analog input voltage deviates from the range of 0.6 volts in any direction, then one of the diode may be forward biased and latch up may be occurred. 10 KΩ is recommended maximum source impedance for analog source.

2 The PIC microcontroller are used in analog to digital converters in which the comparator converter the analog signal into digital signal.