It is the most common connection used to connect a computer to different devices such as digital cameras, printers, scanners and external hard drives etc.

USB Type-C  Its plug connects to both “hosts and devices”.

The main steps involved in this project are:

P18F2550/4550 supports low speed (1.5 Mb/s) and Full Speed (12 Mb/s) so for USB we have to select a specific clock. An internal clock of either 6 MHz or 48 MHz is required because of timing requirement imposed by USB.But there is a problem in using the crystal of 48MHz. This crystal is of high cost and it also creates noise. Since higher the crystal, the greater will be noise.There are numerous choices to achieve the USB module clock requirement which still provide flexibility for clocking the rest of the device from the primary oscillator source.Here, the crystal oscillator used with PIC18F4550 for USB Interfacing is 20MHz crystal oscillator. It is used for internal oscillation of the microcontroller and it is connected on 13 and 14 pin of MCU.

In the case of 20MHz crystal: 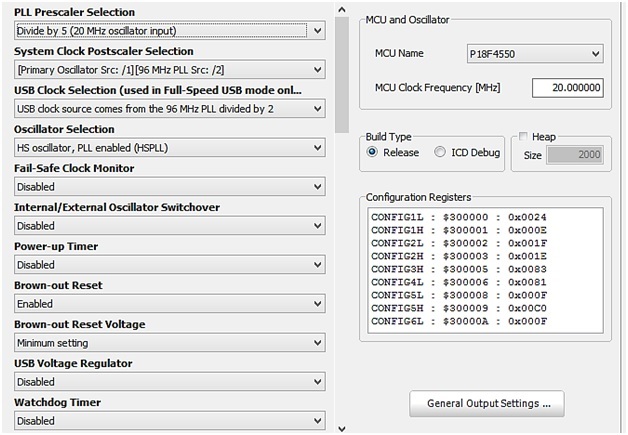 Make the circuit diagram as shown in the schematic:

LED’s on (RD2, RD3) are used as control pins, but these control pins can be used to control other things too. It can easily interfaced with L293D Motor Driver, DC Motor, Stepper Motor, relay switches , servo etc.

Code for USB interfacing with microcontroller is given below. But to use this code you have to add device driver also.  Before using this code, user should create USB device driver by going to tools of Mikro C for pic and click on HID terminal and generate descriptor.c file and paste this file in your main code folder.

The code for the micro-controller is written with some special software which have own programming language similar to C e.g: mplab, microC software. The code is then compiled to a respective output. In this process the “.hex” file is generated which is to be burn/fuse in the microcontroller.

BURNING THE CODE IN MICROCONTROLLER

The output loaded into the EPROM of the microcontroller is called the firmware. We need a special hardware to fuse this output code (hex file) into the MCU. JDM programmer is an example of such device that is used to load the hex file to the MCU. It is easy to make and cheap.After loading, chip off the PIC18F4550 from the programmer (1ST time loading of hex code) and insert it back into the USB interface circuit.After this, we have to provide the driver.

We don’t have to follow this step (use of programmer) every time for loading the firmware (hex file). Once the base firmware is loaded into the chip we can update output hexfile directly with the interface development circuit with smallbootloading software.

Connect the USB cable from the computer to the USB Interface. Even after completing the circuit and also the programming in microcontroller, it will not start working properly. As we know that new hardware installation requires driver for windows to get detected by the system.

For Driver Installation and Bootloading operation we need to download and Install USB MICROCHIP FRAMEWORK from microchip website.

For starting the circuit, we have to initialize it in BOOTLOAD Mode. In the USB interface circuit, as already explained, there are two buttons,one is theRESETbutton and another is the BOOTLOAD button.

When the windows will ask for drivers,go for manual driver search and browse to above mention location folder for Drivers.After the Drivers are installed Led1 and Led 2 (connected on RD0 and RD1) will start to flash alternatively which means that our USB circuit is perfectly communicating with our PC.After the drivers are installed, whenever to connect this circuit with our computer, we don’t need to press reset orbootload buttonsand the LED’s will start to flash alternatively.Now the USB Interface Circuit Board is ready, and we can LOAD our own hex file into the chip Directly from USB BOARD, (without JDM programmer).

It is not necessary to use a programmer (burner circuit) for burning the firmware (hex file) into the PIC18F4550. The JDM programmer is used only for the first time programming of the code and for other stages we can use a Bootloading Software to burn new code directly from USB interface circuit to MCU. That MCU can be used for other specific circuit working for which the output code was designed for.

2 thoughts on “USB interfacing with PIC microcontroller with code”