Now lets start with introduction of relay and how relayworks and at the end of article, we will see how to interface relay module with pic microcontroller. 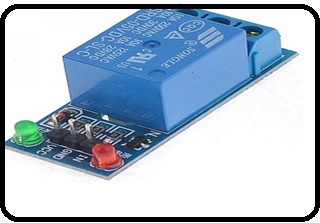 Relay modules are available in different channels such as single channel and multi channel etc. Single channel consists of only single relay and multi channel consists of multi relays which are connected in parallel with each other. Every relay normally consists three inputs pins such as VCC, GND and signal etc. Similarly, it also consists of three output pins such as NC (normally close), NO (normally open) and COM (common). Supply voltages are applied at VCC and GND pin which are normally 5V dc and signal voltages are applied at signal pin. Every relay module also consists of two LEDs which tell the relay is power on or off.

According to the figure 2 when dc voltages are not applied at input pins of relay module then this relay does not come into in active position and common point remain connected with NC point means with normally close point. During this position if any current is available at common point then this current is passed through normally close point. Then the circuit or thing which is connected with normally close point, it would be come into turned on position otherwise it would be remained in turned off position. Similarly, when the voltages are applied at input pins of relay then this relay come into in active position means when voltages are applied at coil terminals then electromagnetic field is produced.

How to Interface Relay Module with PIC16f877a Microcontroller