If we look around ourselves, then we have so many automatic systems. In all these automatic systems, the embedded system plays a very important role for their automation. Similarly, the microcontroller is also very essential part of this system and different types of microcontrollers have been currently used in these systems such as PIC or Atmel. These microcontrollers are not directly programmed, these are programmed through the compiler and each type of microcontroller have separate compiler. The Compiler, basically converts the source language into program language which is target language of any system. In other words, the compiler converts the high-level language into machine language or binary instructions. Suppose if any one talk with any other one who is deeply associated with programming language then he first prints the “Hello world” and for this printing first he would write simple the program such as

Then this basic program print the “Hello world” on any associated LCD or computer screen. This is not so much simple, there are so many complex things behind this. When we write anything, then we write in c language which is high level language, the computer or controller can’t understand this high-level language because it only understands the machine level or assembly level language. For understating the computer or controller we would have to convert it into low level language such as machine level language. This is only done through the compiler. The compiler process drawing is shown in figure 1, which shows how the sources files are converted into object files and program files.

MPLAB XC8 C pic microcontroller Compiler:The MPLAB XC8 C Compiler is the best compiler of top series complier and it only supports the 8 bit pic microcontrollers such as PIC 10, PIC 12 and PIC 18. It is also knowing as ANSI C compiler.  It is developed by microchip for program the pic microcontrollers. It is free to use and is available at microchip official website. For installing this compiler first, you must need to install the MPLAB software then you could install the XC 8 compiler, which is also available at microchip official website. In this compiler, the user write the code in c language then compiler convert this code in assembly language. The size of its latest installing package is 75MB. It is more flexible compiler when you write anything then you just imagine you are writing in pic microcontroller. It is very easy to use for the beginners.

MPLAB XC 32 C pic microcontroller Compiler:The MPLAB XC32 C Compiler is also the version of MPLAB XC compiler but it is only used for support or program the 32-bit microcontroller such as PIC32 MZ, PIC32 MX and PIC32 MM. It also has the same features like the CX8 C compiler only differ the bits of microcontrollers.It is also easy to use and quick to lean, available at microchip official website Its window figure is shown below which shows all the MPLAB XC C compiler. 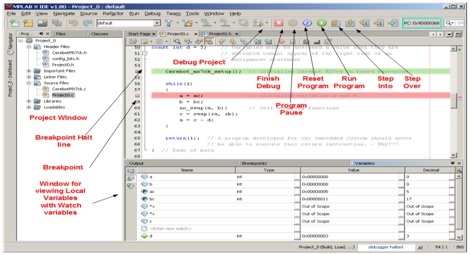 The mikro c compiler is the second-best compiler asper my list. It is developed by mikroelektronika company for supporting or programming the all bits of pic microcontrollers.  It is not free but its student version is totally free and is available on mikroelektronika official website. it is easy to use and have friendly environment for all users. It has over 600 function in its library. It has powerful IDE with addition software tools and is compatible with mikroelektronika development board for friendly user interface. When user purchase it, then he would pay only one time because it has auto updating setting and always supporting the new chip families. It has efficient debugging process means it debug the whole program step by step and fast. It has the TFT window in its library which have graphical user interface tools. This window could be close seamlessly by pressing the keyboard shortcut F12The user can easily drag and drop he graphic elements during the compiler generates the code automatically by using the background source. This mikro c compiler also have the integrated tools such as LCD custom character tool, UART terminals, UDP terminals, HID terminals, ASCII chart, GLCD bit map editor, seven segment editors, active comments editor and advanced statistics etc. The features in every version of mikro c are almost same.Its window figure is shown below.

The pic CSS compiler is the third best one compiler as per my list. It is developed by CSS development company over 20 years ago, for providing the software solution in embedded system for PIC microcontrollers and DSC devices. This compiler is quick to learn and easy to use for the users which have less experienced in the field of programing or software using. It has the detailed textbook in which c language is explained deeply and how it is apply on pic microcontrollers. This compiler has pro level optimization means the memory size of the instructions, hardware stack size, peripheral resources, functionality of pin and memory banking etc. It has the largest built in functional library such as data type (int1, int32, short, long and float etc.), standard C syntax (if, else, while, do, switch and break etc.)and powerful pre-processor commands for pic microcontroller. It has ready to run examples of programs for user understanding. It has the facility to migrate between one microcontroller to other any type of pic microcontroller. It has standard C constructs, peripheral drivers with minimum development time. It has so many the convenient functions such as #bit and #byte etc. It also has bit and interrupts mange and define facility. Its window figure is shown below: 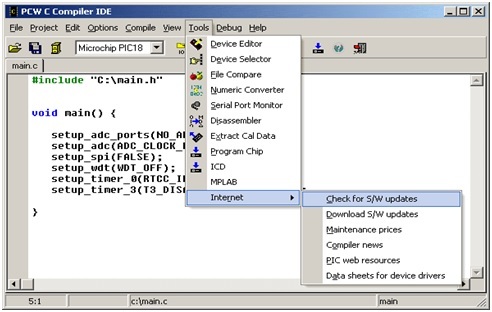 In above descriptions, we have explained different types of C compilers but there is not so much difference between all the compilers. If we talk about the back end generated machine code, then these are almost same but if we talk about their syntax in c language then these are quite different between each other. Suppose if we are working on LCD then for display anything on LCD screen, then print command would be different in different compilers. Therefore, the switching of any user from one compiler to another compiler is  not quite difficult. you just have to understand different between libraries and syntax of these compilers.