USE INPUT OUTPUT PORTS OF PIC18F452 MICROCONTROLLER: PIC18F452 microcontroller has a number of input/output pins which are used for connection with external devices. It has total 40 pins. Out of these 40 pins, 34 pins can be used as input output pins.These pins are grouped into five which are called PORTS denoted by A, B, C, D and E. Here in this article we will learn how to use I/O Ports of PIC18F452.

Some pins of the I/O ports are multiplexed with an alternate function from the peripheral features on the device. If a pin is used as any other function then it may not be used as a general purpose I/O pin. Here we will just restrict with the input output features of ports.

Each port has three registers for its operation. These registers are
• TRIS register (data direction register)
• PORT register (reads the levels on the pins of the device)
• LAT register (output latch)

TRIS is a data direction register. Setting TRIS bit for corresponding port will let know the data direction (whether read or write) to microcontroller. Each PORT has its own TRIS register E.g: For PORT A

We can also make specific bits of port as input or output.

It reads the levels on the pins of the deviceand it assigns logic values (0/1) to the ports.The role of the PORT register is to receive the information from an external source (like a sensor) or to send information to the external elements (like an LCD). E.g:

For input mode of PORT A

Reading the PORTA register reads the status of the pins. We will firstly set the direction of data by TRIS register TRISA bit=1. It will make the corresponding PORTA pin an input and put the corresponding output driver in a Hi-Impedance mode.

For output mode of PORT A

We will first set the direction of data by TRIS register. Then port is given the value for output. A write to the PORT register writes the data value to the port latch.

The Data Latch register is also memory mapped. LAT register is associated with an I/O pin. It eliminates the problems that could occur with read-modify-write instructions.

The operation of each pin is selected by setting the control bits in the ADCON1 register.

PORT B:
PORTB is an 8-bit wide, bi-directional port. The corresponding Data Direction register is TRISB. 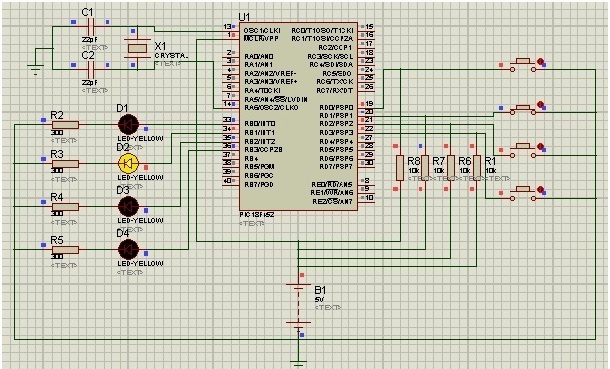 Coding is done as:

2 thoughts on “USE INPUT OUTPUT PORTS OF PIC18F452 MICROCONTROLLER”