The Global Positioning System (GPS) is a satellite-based navigation system that consists of 24 orbiting satellites, each of which makes two circuits around the Earth every 24 hours. These satellites transmit three bits of information – the satellite’s number, its position in space, and the time the information is sent. These signals are picked up by the GPS receiver, which uses this information to calculate the distance between it and the GPS satellites. With signals from three or more satellites, a GPS receiver can triangulate its location on the ground (i.e., longitude and latitude) from the known position of the satellites. With four or more satellites, a GPS receiver can determine a 3D position (i.e., latitude, longitude, and elevation). In addition, a GPS receiver can provide data on your speed and direction of travel. Anyone with a GPS receiver can access the system. Because GPS provides real-time, three-dimensional positioning, navigation, and timing 24 hours a day, 7 days a week, all over the world, it is used in numerous applications, including GIS data collection, surveying, and mapping.

Let’s assume that the receiver determines that it is 20,000km from a particular satellite. This means that the receiver could be anywhere on an imaginary sphere with the satellite as its center. If it also determines that it is 25,000km from a second satellite this narrows its location down even further. The only location in space where it can be both 20,000km from the first satellite and 25,000km from the second is where these two spheres intersect. That intersection is a circle of points. A third measurement adds another sphere which intersects the circle formed by the first two. This intersection occurs at two points, and so, with these three measurements, the GPS receiver has narrowed down its location to just two points in the entire universe. 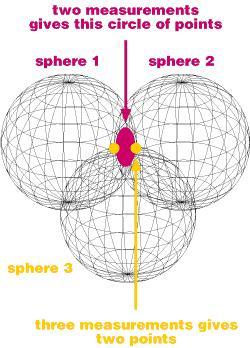 Although this example demonstrates the use of four satellites, many receivers are capable of tracking more than four satellites at a time.  In some cases this improves the positional accuracy of the receiver.

Following is the list of components required for this project.

Pin out of GPS module

GPS module has 4 pins provided out of module for connections. 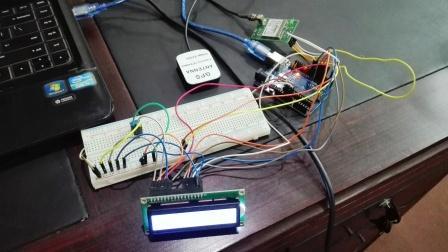 Connect the circuit as follows

These are the connection which will be used in program. For rest of the LCD connection see tutorial on LCD interfacing with Arduino.