Nokia5110 LCD screen is a simple black and white screen but it was the best display for mobile in its time. The usage of the screen was mostly in the Nokia 3310 and 5110. Therefore, the increase of color graphics and smart screens the screen is now the only available in most of the developing projects and small low budget devices. In the LCD, the Liquid crystal method helps to show the output data with a total of 84×48 pixels. The LCD uses the SPI pins to communicate. It is useable with Arduino officially with the use of the library. The display colors also come in multiple backlights.

What is Nokia5510 LCD Display?

Nokia 5510 LCD display is a graphics screen LCD display and has been used for a lot of applications. Initially, it was designed only for iconic Nokia 5510 cell phone screen but now we can easily use it for different purposes such as for displaying alphanumeric character, draw lines, shapes and even for displaying bitmap images because of its 84*48 monochrome pixels mean 84 columns and 48 rows. All necessary functions of this display are packed in a single small chip which is operated at very low voltages. It is very low cost more precise, more reliable and easy to use LCD display.

The pin configuration of the LCD is almost SPI but in oneway only. The LCD only uses a one-way communication to operate because it doesn’t have to send any data to the microcontroller. However, it has two modes of data and command modes for operating properly. 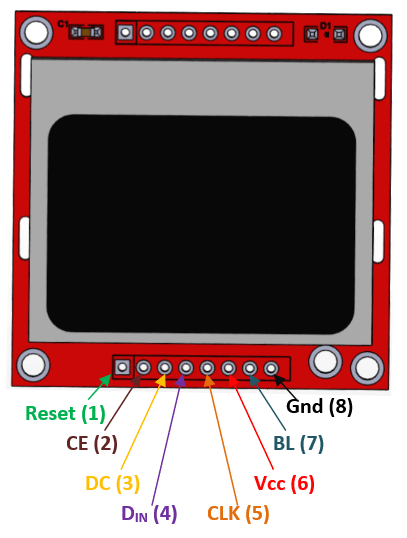 How to make connections with Microcontroller?

Every Nokia 5510 LCD display consists of eight pins which are used for different purposes. Its first one pin is reset pin and used for resetting the LCD display. during reset zero voltages are applied at this pin. Second one is CE pin, which is enable pin and is used for displaying any particular display when more then one SPI peripherals are in used. Third one is DC pin, which data/command pin and is used for switching data mode (high) to command mode (low).

The Nokia5110 LCD uses a simple liquid crystal method for each pixel to show the data. In the liquid crystal, the three layers help to make a single pixel. The first layer is the glass, second is the polarized sheet and the third one is the crystal molecules. The light passes from one glass towards the other glass but it has to move from two polarized sheets. The polarized sheets are at different angles. So, to pass the light the molecules need to change their positions so the light gets a change in angle according to the second sheet with the help of modules. If light passes from it, then it is viewable by the user but in case of deflection, the LCD will show a dark pixel. However, the liquid crystals always use a light absorption method to show the image.

The Nokia5110 LCD uses SPI communication to operate. It is due to the driver attached to it. The data from the controllers pass to the driver which store in the buffer and also show on the LCD until it is in the buffer. The new incoming data will able to replace the previous one. The driver only takes the SPI input signal and uses the rest of the pin to operate the LCD. The driver is PCD8544, which is only for 48×84 pixels LCD. Its functionality is viewable by the following block diagram: 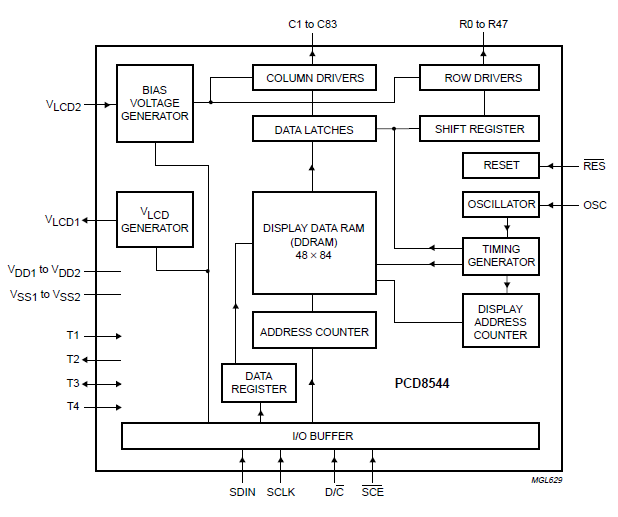 The driver has its 504bytes GDD RAM. However, Its memory comes with 6 blanks and each blank has 84 segments and each segment can store the 8 bit of data. Therefore, the whole LCD data can store in the GDD RAM of the LCD screen.

The input pins of the driver are the same as the LCD pins which are already in the pin configuration section.  The output pins of the driver are responsible for every function on the LCD screen. However, four types of output pins exist in the driver. The first part is the Row and Column pins. The row pins are 48 and columns are 84 in numbers. Therefore, all these pins connect to each pixel of the LCD and they are responsible for each output by them. The next part is the power part. The VSS, VDD, and VLCD help to power up the LCD and itself. The third part is the test pins that connect with the ground. In the Nokia5110 LCD, they have no use.

The last part is the oscillator pin, to attach an external oscillator. There will be remaining dummy pins that have no use in the LCD screen. In this Nokia5110 LCD, every kind of symbol is drawable. Even images can also show on the screen but first, it requires to convert into the bitmap format.

The use of the Nokia5110 LCD is very simple with the library. The library is for Arduino only.

To use the LCD with Arduino the following circuit needs to establish.  However, some pins are moveable but some will depend on the board/Arduino type. 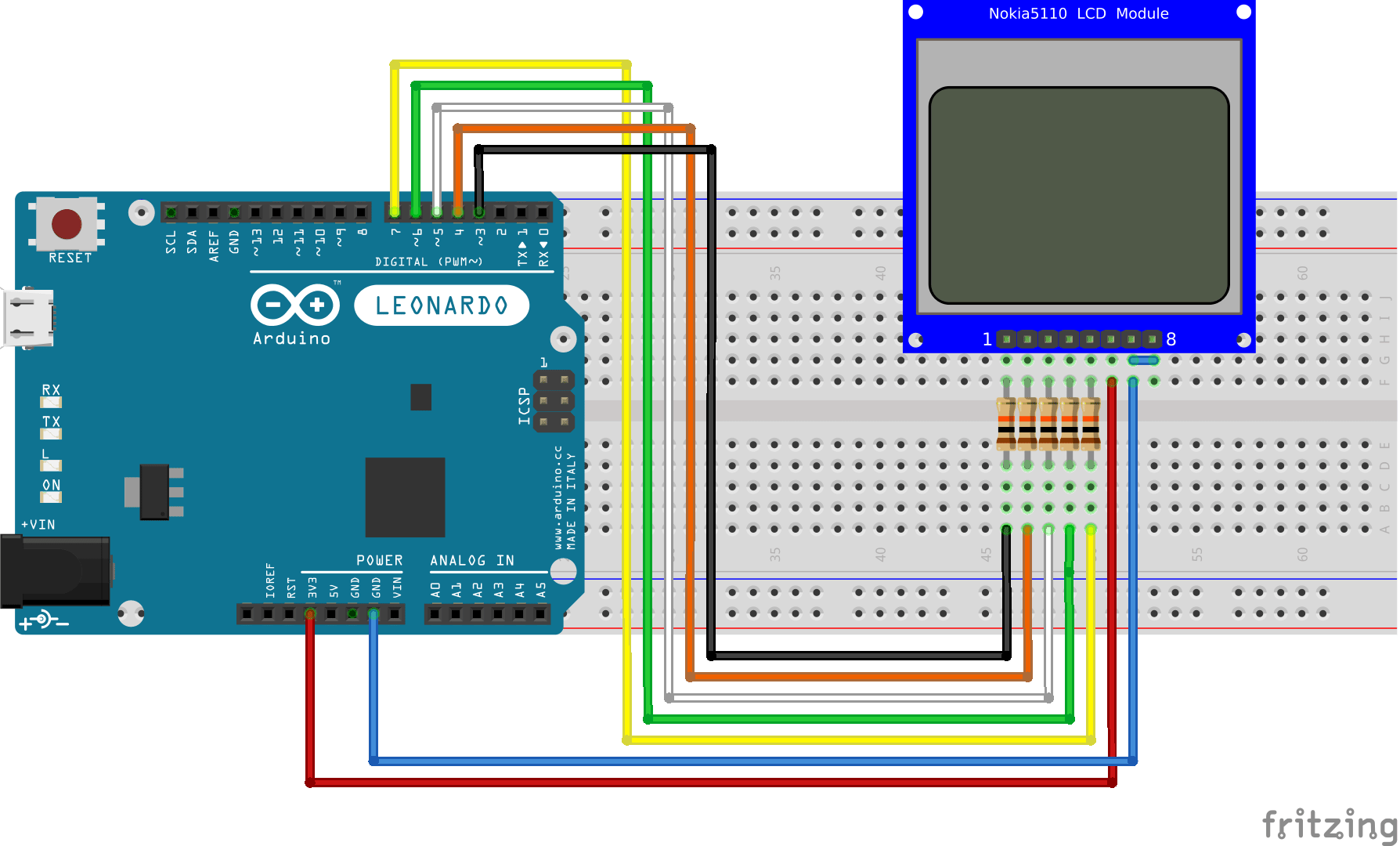 The libraries which help to establish the communication are:

The library will require the pins number to operate and a specific object which can help to call each function of them. The rest of them will require to initialize the LCD.

The LCD character contrast is changeable from the programming but LED light changes externally. However to change it add the potentiometer at the LED pin, which is “BL”.

The following code will help to initilize the LCD with Arduino but to use it properly everything needs to define. Therefore, here’s the simple text display for the LCD screen.

The above code will only display a simple text. Therefore, to show the image, scrolling and rotating text, the library also helps. In the library, some multiple methods and operations can perform but every operation has some limitations. Like image needs to be in bitmap format, etc. 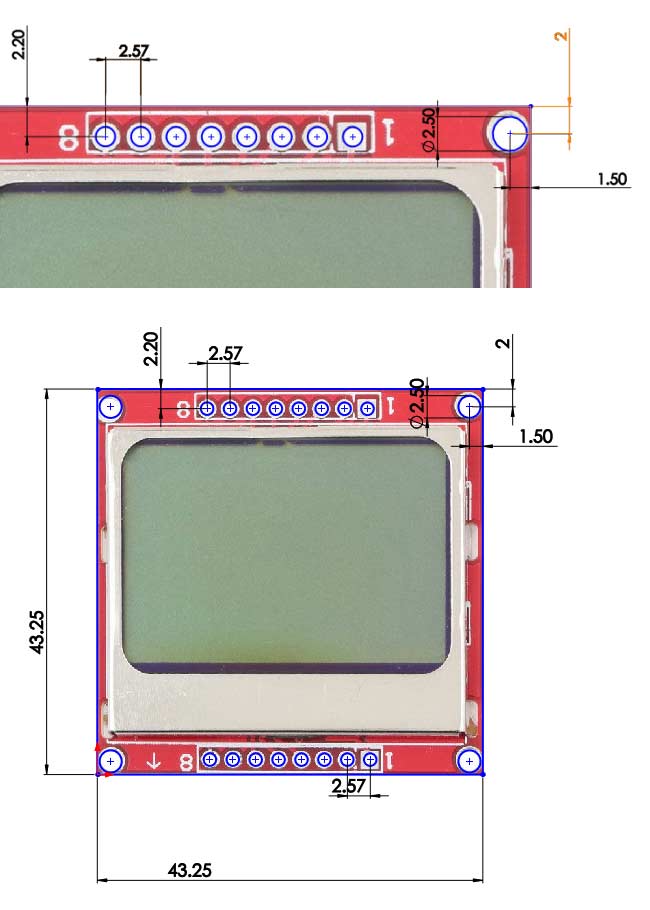