Light sensor and street light control using Arduino is designed to measure the intensity of light or amount of light. Street light is controlled automatically with the help of the intensity of light and Arduino. Arduino UNO R3 is used in this project. Light-dependent resistor is used for the detection of light. The relay is used to provide isolation between Arduino and 220 volt AC street light. I will explain the functionality and working of each component in later part of this article. 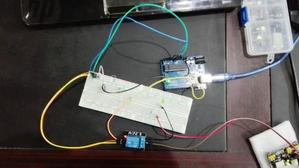 Circuit diagram of light sensor and street light using Arduino is shown below. Now I will explain each component use in this project.

In this project, a relay is used to provide isolation between low voltage circuitry and high voltage circuitry. Arduino is also used to provide a control signal to relay whenever the intensity of light falls below a certain level. The control signal is generated from pin 13 of Arduino which is used as an output pin. Transistor is used as a switch here. If you don’t know how to use input or output pins of Arduino UNO R3, read the following article :

“How to use input or output pins of Arduino UNO R3“

Code for light sensor and street light control using Arduino is given below :

The code is self-explanatory and I have also used comments with code line. But if you still have any issue while making this project, you are welcome to comment on this post. Thanks for reading this article. If you consider it helpful kindly share it with your friends.