PICK AND PLACE MULTI-AXIS Robotic ARM. Recently, Multi axis machines with sophisticated sensors are used in industries with accurate and precised work output which directly results in the growth of the industry. In automation industrial robots are programmed for a single task using the sensory information. Depending upon their applications robotic arm can be designed accordingly.In today’s industrial environment a robot or more precisely robotic arm is not something that is hard to find, we can find a mechanical assistant for the human worker in almost any factory. PICK AND PLACE MULTI-AXIS Robotic ARM is one of the favorite project for mechatronics  engineering students.
In most of the factories we can find specified robots, which were made for that specific task and they cannot be reconfigured to other task, mostly of their mechanical setup.PICK AND PLACE MULTI-AXIS Robotic ARM deals with the multi-axis machine to be perform the same pick and place task with ease, the machine is equipped with intelligence and a Color sensor to enable the machine to judge the color of an object, thus allowing autonomous movement of the arm to the optimum position for grasping the object using color sensor. 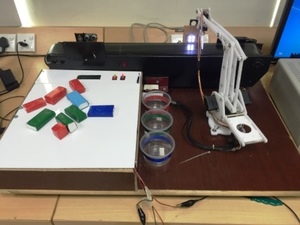 The main objective of PICK AND PLACE MULTI-AXIS Robotic ARM is to basically sort different colored objects but there are also sub tasks to be accomplished for the proper working of whole system.The tasks are mentioned below

Basically the PICK AND PLACE MULTI-AXIS Robotic ARM can be classified in two parts.

Both the parts are necessary to accomplish the PICK AND PLACE MULTI-AXIS Robotic ARM. The scope of this project will be focused on object sorting using color sensor. The scope will include as follows

Moreover PICK AND PLACE MULTI-AXIS Robotic ARM has wide area of applications in the field of education, exploration and electrical mobility etc.

C language is one of the languages to program Arduino. Sensors interfacing with Arduino board are very easy to understand.We have use a 5-axis robotic arm structure for pick and place application. Our structure consists of 5 servo motors connected to PWM pins of Arduino.

Conveyor belt is used to place the object so that it can be sensed by sensor and picked up by arm for placement in respective box. Boxes of three different colors are used to sort the objects coming on conveyor (red, green and blue).Dc motor is used to run the conveyor. To have control of conveyor belt we have used a relay circuit with motor. The connectivity of all the components are same as mentioned above.

When a fixed distance (i-e 8 cm detected by sonar sensor) is cut by the object placed on conveyor a pulse is generated from the controller which is supplied to the BJT transistor (BJT is used for relay switching action) base which switches ON the transistor and in turn switches ON the relay and as relay is turned on it changes the state of valve from normally close to normally open and DC motor is switched OFF for 2 seconds. Again pulse generated by controller becomes low and BJT turns OFF, so do relay for 1.2 seconds and object reaches in front of color sensor. Now color sensor senses the color of the object by the algorithm fed into the controller that is fixed range is defined for each color.

The delay of 1.2 seconds is calculated by hit and trial method as it is feed-forward process. After 1.2 seconds motor is again turned OFF so that next object is placed in starting of conveyor. Each time the object is placed, detected by sonar and color sensor, picked and placed by arm it will be displayed on LCD.

PICK AND PLACE MULTI-AXIS Robotic ARM are used in environment, which is either hazardous (e.g. radiation) or not accessible. Among the many justifications for using robotics, the most important is to shield people from working in dangerous environments and from handling hazardous materials. From dealing with chemicals that are explosive to handling radioactive substances, robots are routinely used to perform tasks that would kill or maim people.

PICK AND PLACE MULTI-AXIS Robotic ARM can be used in material handling in logistics and packaging industry where the objects moving through a conveyer belt can be separated using a color detecting robot.

The important application in agriculture field where it can be used to sort the different agriculture products like grains, lemons, almonds, grapes, and many more.